Why 'Fully Loaded' Kodi Sticks are a horrible idea

Since last year, there has been a vast rise in the number of people buying ‘fully loaded’ sticks allowing them to access premium services including Netflix’s Original Series’, films still in cinemas and live Sky Sports streams.

How does it work

Kodi itself is not the system that provides pirated content, these are provided by the plugins which are installed atop of it. There are different types of plugins that serve content in different ways, from research the content is provided by:

Are these a scam? 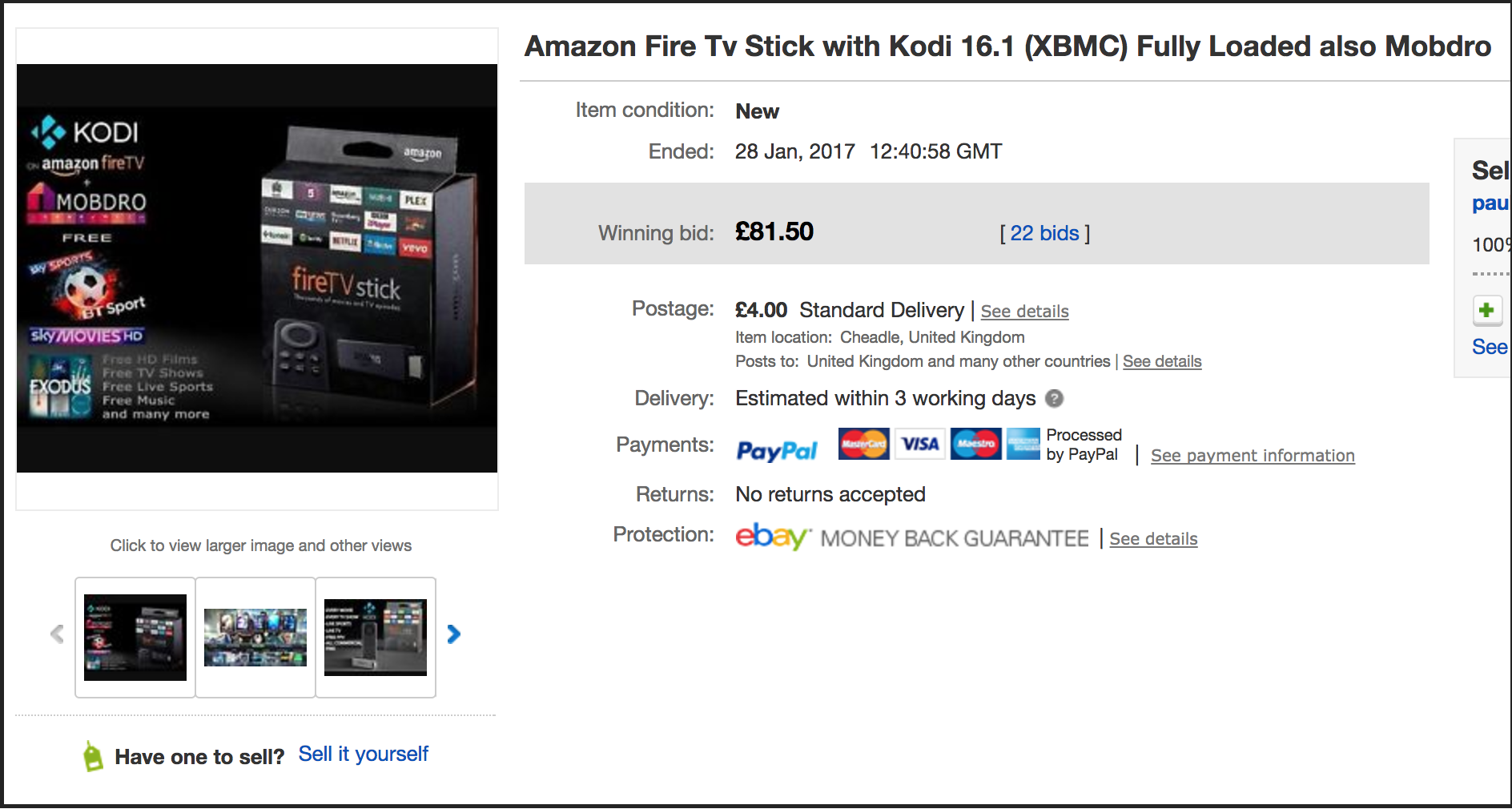 In terms of price paid for these devices, they’re a pretty clear scam with a quick search on eBay for ‘Loaded Kodi Stick’ bringing up around 750 results. The devices sold are just normal smart TV sticks with a few apps sideloaded onto them (which are free off the internet anyway) and resold at a significant margin.

The image of the stick shown right was just the top result with an Amazon Firestick (RRP: £35) with Kodi sideloaded and plugins ‘Mobdro’, ‘Exodus’ and other repositories promising free HD TV and films as well as live sports from both BT and Sky. So along with the content, the markup charged on these devices is also criminal!

Chances are that the web server that you’re connecting to stream your theoretical films is logging the connection source IP and content accessed (and unless you’re using a VPN, that’s going to be your home IP they have). In the event of a file sharing website being seized by the authorities there will be around a days worth of logs (depending on the host’s retention policy) detailing IP addresses. On the other hand, connecting to a honeypot is also a possibility which would serve you a copy of the media you want while recording your IP, in this instance it’s a matter of not if, but when your ISP contacts you about copyright activity. Streaming such files is likely not worth the potential trouble.

Am I going to prison?

As to whether you’re going to end up in a cell for watching The Crown from your Kodi stick is a different matter. It’s really dependant on the plugins you’re using, with those that silently seed programmes in the background being far more likely to get you a warning letter from your ISP.

The police have so far come after several people in the UK for the distribution of these Kodi devices but are aiming to shut down the distribution at the source as opposed to stopping individual users; obviously it’s still inadvisable to stream in such ways though.

Kodi is not enjoying this recent influx of users with their identity being tarnished by association with these brands, and support forums filled with questions about non-functional plugins and broken links.

As to the ethics of piracy, it’s an interesting problem and not an issue with the demand for media. An overwhelming majority of people are willing to pay for content but just can’t access it at a reasonable price.

I wouldn’t advise going out and buying one of these streaming boxes as support from these ‘vendors’ is pretty lacking, you’re living your life in a legal grey area and chances are your ISP won’t hesitate to give up your information to a copyright owner who comes calling about piracy from your IP address.